“The Fisher in Connecticut,” a Zoom Talk Through Canton Public Library 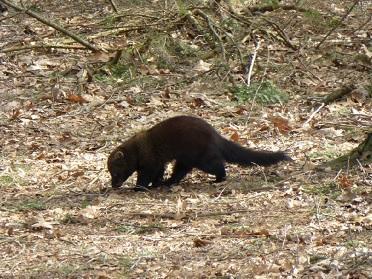 What we may have heard of as Fisher Cats are neither related to cats, nor do they fish. What’s true is that the animals called fishers are found in our part of Connecticut, and their numbers are increasing where farmland is turning back into forest. On Wednesday, April 28, at 7:00 p.m., Canton Public Library will host a free Zoom presentation on the fisher with expert wildlife biologist Paul Colburn.

A cousin of the martin but more genetically related to wolverines, fishers were once hunted and eradicated from much of New England, trapped for their valuable pelts and to prevent clashing with farmers, who  considered them pests. But thanks to the logging industry, who discovered that fishers were the only predator of seedling-destroying porcupines, fishers were reintroduced. Successful initially in Northern New England forests, they have spread from Southern Canada to New York, Southern New England and as far south as West Virginia.

Fishers are omnivores who eat a variety of small animals, reptiles and amphibians, even insects and dead animals. They will eat berries and other fruit or mushrooms when available. Unfortunately, fishers are also known to prey on chickens, cats and small dogs, and so in areas where their habitat overlaps human neighborhoods, people must provide extra protection for their pets.

The “Fisher in Connecticut” presentation focuses on the detailed history of fisher in Connecticut, and an overview of their habitat, diet, and behavior. A special feature of their reproduction, delayed implantation, will be touched on. Learn whether fishers can be identified commonly by nocturnal cries, or whether they tend to be silent. Fisher artifacts will be shared with the audience.

Our presenter, Paul Colburn is a 2015 graduate of the Master Wildlife Conservationist Program (MWCP) and a certified Master Wildlife Conservationist (MWC). The MWCP is a Connecticut Department of Energy & Environmental Protection (DEEP) adult education program that trains volunteers in the fields of wildlife management, natural history and interpretation.  Mr. Colburn is an avid outdoorsman, a graduate of Wesleyan University and served honorably in the U.S. Army.

We invite you to participate in “The Fisher in Connecticut” with us at Canton Public Library on Wednesday, April 28, at 7 pm on Zoom, through a link we email to you. The program is free. To join us, please email kbunn@townofcantonct.org to obtain login information. For other questions please call/email Katie Bunn at the library, (860) 693-5800.