Suffrage, Hemingway and Italy’s Veneto Region: A Kinship of Valor in World War I

What do US Suffrage, Ernest Hemingway & Italy’s Veneto Region all have in common? It is their participation in World War I.

Though it has been nearly 60 years since his death, Ernest Hemingway remains relevant today as a writer and as an international figure. A major biographical documentary by Ken Burns airs April 5, likely to much acclaim. Similarly, the airwaves have been filled in recent months with remembrances of the woman’s suffrage movement whose 100th anniversary was this past August.

In Mariann Millard’s May 6 presentation, these three disparate subjects, who shared common bonds during the Great War, will be interwoven as their individual tales of effort and sacrifice are told. We’ll hear stories of U.S. women who deliberately and tirelessly supported a “modern” war effort to demonstrate their participation in world affairs, their ability, and right to vote. We’ll learn how Hemingway got his start as a literary giant by supplying Italian soldiers with candy and cigarettes at the front. Lastly, we’ll explore how Italian citizens overcame a formidable enemy in the mountains and along the rivers of the Veneto region. 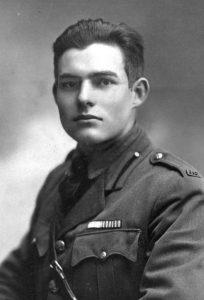 Step back in time with us to appreciate the unexpected kinship of these three subjects and examples of individual and national valor during wartime among them. Participants will gain an understanding of how, as a result of these models of leadership–and bravery– the world is inspired and influenced to this day. Mariann’s engaging and poignant program ends with an enduring mystery solved.

Please join us on Thursday, May 6 at 7 pm via Zoom for Mariann’s free program, Suffrage, Hemingway and Italy’s Veneto Region: A Kinship of Valor in World War I, presented by Canton Public Library. Registration is required for us to provide you with the log-in link/code. To register or to receive more information, please email kbunn@townofcantonct.org, or call the library at (860) 693-5800.