POSTPONED. Author Talk with Rob Penfield, author of The Monsters That Never Die and A Life of Obstructions 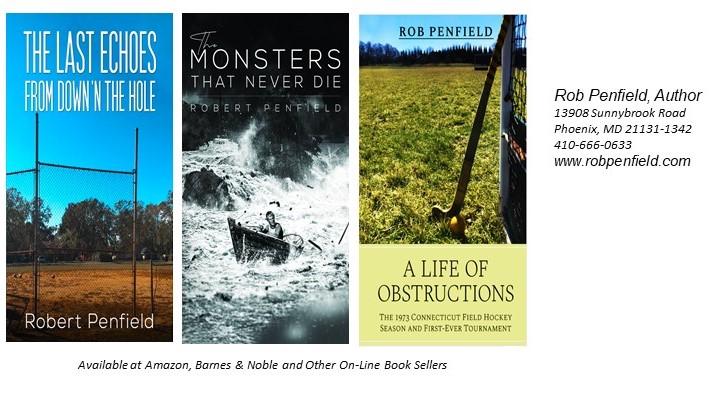 Come meet Rob Penfield in person at Canton Public Library.  He will read from several of his books and answer questions.  Registration is requested to help with seating set-up.  You can register online in this listing or call the library at 860-693-5800.

The Monsters That Never Die

When he was nine years old, Robert Penfield heard an eerie voice beckon to him from the hurricane-ravaged waters of the local river. He believed the garbled voice speaking to him from the bowels of that dirty flood water was the voice of death. From that moment on, his life changed forever and his story began.This is a story about a young boy who went fishing and came home with more than any kid could fit into his head, the lore of a 300 year old monster from another realm.It’s a story about a young Indian maiden, murdered by a rogue band of warriors in 1670, reincarnated as a monster from another world.It’s a story about common people and common lives, who journey through fear and deal with life’s everyday monsters whether they’re real or make believe. This is a story about a young boy who grew into a man, one who lives a life where he spends every day thinking about dealing with those monsters.

A Life of Obstructions

On November 17, 1973, the world changed and a legend was born. A band of girls from tiny Granby High School won Connecticut’s first-ever state field hockey tournament. They beat Guilford High School scoring the winning goal in the second sudden-death overtime.

This is a journey through a life of highs and lows. A regular season of sticks and obstructions. Games against long-time rivals and emerging powerhouse teams. The joy and pain of a single elimination tournament.

This memorable season is a bridge to a 50-year journey for the game of field hockey in Connecticut’s public high schools; overcoming the barriers of systemic oppositions by state municipalities to federal guidelines for Title IX, the institutionalized practices of gender bias, discrimination and homophobia.

A Life of Obstructions by Rob Penfield tells a story about common people and their accomplishments playing a game, not because they had to, but because they wanted to be a part of something special. Because on November 17, 1973, the world really did change and a legend was born.

Rob Penfield is a Simsbury, CT native with a passion for writing stories about his hometown. He attended Northampton Commercial College where he captained the basketball team and is a graduate of American International College in Springfield, MA. He is a twice wounded and decorated Vietnam veteran who served with the 9th Infantry Division during the TET offensive.

He worked as a professional consultant developing business training programs in every US state and for more than 200 clients in over 30 countries worldwide.

He ran his own boutique consulting company for 27 years. He’s a lifelong athlete including his playing field hockey at Fort Sill, OK. An opportunity which provided him with a special insight and understanding to tell the story of Connecticut’s first-ever high school field hockey tournament.  To tell that story before those memories were lost forever.

As a published writer, Rob has previously authored the riveting books, “The Monsters That Never Die” and “The Last Echoes From Down ‘N The Hole.”

Rob and his wife, Bonnie, originally from Shamokin, PA, live a comfortable retired lifestyle in Phoenix, MD with their cats and rebuilt Model A Fords.